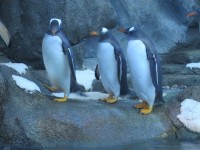 We had the pleasure of a morning visit to the Calgary Zoo on a cool March day. It was dry and there zoo was not crowded. I think there were more moms and strollers than anyone else! The zoo itself is not huge but it’s got a good spacious feel to it.

The first exhibit was the Penguin Plunge, which was the most convincing penguin habitat I’d ever seen. Bored penguins standing around was replaced by space for them to dive and swim while being observed by we monkeys. Gentoo, Humboldt, King and Rockhopper Penguins were all represented.

The Canadian animals section was of interest because we wanted to see what we might likely miss (and did miss) driving through the National Parks. In spring and summer when the foliage by the road side grows, it does attract the animals. Right now the roadsides were all sand and salt and not appealing. The various types of mountain goats were represented along with wolves, bears, snowy owls and others.

The African section was bright and airy with impressive giraffes and hippos. The lion enclosure was busy as two males and two females tussled over dinner, a sight that the vegetarians in the crowd might not like!

On our way to the Eurasian section, we encountered pink flamingos from Chile. Members of my party though pink flamingos were a joke. Hah. The big draw was the Komodo Dragon, which kind of stationary, but the baby ones were very interesting. Across the way was a Rhino.

Due to a pair of small legs and timing issues, we didn’t see the Red Panda, which I have in the past and I urge you to make sure you have the time.

The Caglary Zoo is located near downtown Calgary via Memorial Drive. The train goes there as well. They charge $8 for parking.

At our hotel, we got coupons from the front desk that did a 50% off the second admission. The regular pricing was